After the big move to Babel we set about setting up our horsey empire.  Fences and gates were replaced and new ones erected.  The old stable was demolished, largely by Freya, and new ones were planned and installed.  Gradually the dream was coming together as the weather improved.  It is worth noting at this point that if you are thinking of a move such as this from a livery yard, you really need horses who don’t mind being left alone.  Each time I took Treacle out on her own, Freya would create.  Each time I took Freya out on her own she wanted to charge home.  Initially I had trouble even getting Freya to go up the lane on her own but, with the help of new local horsey friends, I gradually overcame these problems. None of this had been a problem previously.

However, the dream did start to come together.  We had a group of old livery yard friends visit with their horses in the Spring.  A good time was had by all with camping, riding and fence building parties!  A trip to Pendine Sands was the icing on the cake.

More riding friends visited later in the year and we dusted off the bikes and trekked to the forest for another memorable day.  On this occasion we climbed to Babel Shelter, the view was just stupendous….. our house is somewhere in the valley between the horses!

Part of the dream is being able to ride with my dog.  He has got very good at knowing when a vehicle is coming and returning to the horse. 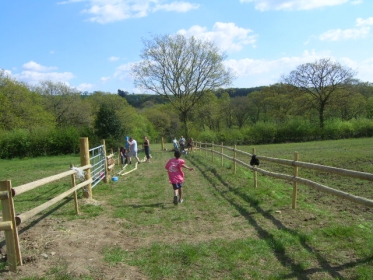 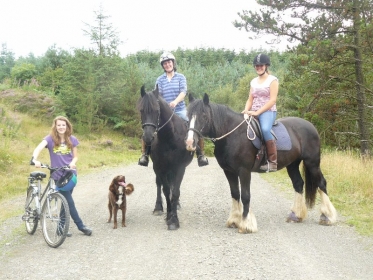 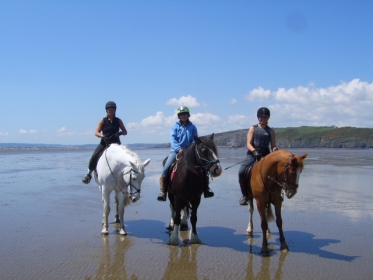 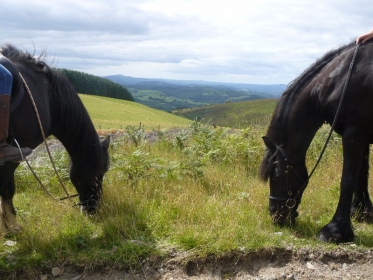 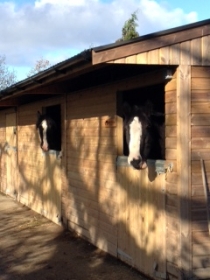 So….. the dream was coming together and I was starting to get a bit more confident.  One day I set off for the forest to ride the loop I was familiar with so did not worry about taking a map with me…. my first mistake!  Freya and I were plodding along quite nicely, we had almost completed our loop and were heading for the exit and our route home.  However, unexpected logging was taking place and our exit was blocked.  Unwilling to retrace our steps, I decided if I kept turning left I would circle back to where I started…. my second mistake!  An hour later I was hopelessly lost with no map and no phone signal.  I told myself not to panic as I knew I could get a signal on the edge of the forest, so I just kept going until I found a number post with a phone signal.  I then rang International Rescue who fortunately picked up the phone on the 2nd ring.  “How are you?” says Nikki…… “I’m lost in the forest” says I……. “You Prat!” says she.  Well, I could hardly argue with that!  She found a map, I gave her my position by the number on the post, and she told me I was quite near to a car park and to keep going.  She and Chris would collect me from there in their lorry.  Oh the relief!  Our problems weren’t quite over tho.  As we got nearer to the car park I realised that it was very near to a firing range where machine guns were being used.  The nearer we got, the more upset Freya became.  But I knew there were those wonderful round pens in the car park, so I her got there, untacked her and turned her into one of the round pens, then stood back and watched her go round and round for about 20 minutes…… the upside of this was that she was more than happy to load in the lorry and get home!  The moral to this story is…… never set off for a ride in the forest without a map and a phone.  The number posts are very useful and, although not an exact science, will prevent you getting totally lost.

That was probably the last time I rode my beautiful Freya in the forest.  We lost her very suddenly when her stomach wall ruptured, apparently a congenital weakness that could have happened at any time.  She was 15 years old.  Once again, Nikki & Chris rode to the rescue and helped transport her to the clinic, but unfortunately she had to be put to sleep the next morning.  That left a very big hole in our little family.  Treacle was left on her own for the rest of the winter and the search started for a new companion for her.  After a lot of horsey shopping, Nikki and I eventually found Nessa who is a bit of a Treacle lookalike.  She is a very green 6 year old, broken but not really done a lot.  She is a brave little horse that doesn’t mind being left alone so will hopefully settle to life here and become a good little trekking horse.

The plan for the summer is to get Treacle driving so I can learn the business, then transfer my knowledge to Nessa.  Hopefully we will be seeing a lot more of the forest and will have lots more “Tales of Crychan Forest” to relate.  SO….. WATCH THIS SPACE!

Beautiful little mare, 5 years old, 29”, ride and drive. On the lead rein or off when ridden. Not bothered about any traffic/machinery. She's got a very soft mouth. Very quiet little girl. Kids can pull her about and get on her themselves, no help from mum or dad needed.

Maygem Dun and Dusted, registered sec C gelding. Absolutely stunning chap and would be top class showing type. Before us he has driven but we haven't seen this.

Meet Peppa, 4 year old black and white Shetland mare, well marked, nice long mane and tail. She is very sweet little pony, great to handle on ground, kids can do anything with her, they ride her around yard on head collar and brush her.

13hh cob mare for sale. For sale is our 13hh black and white ride and drive cob mare. One in a million, anybody can ride or drive her, even if you are nervous. Will ride or drive alone or in company, totally bombproof in all sorts of traffic, good with other horses, she's not bothered.

Stunning Comtois ride and drive gelding. Imported from France 5 years ago. 16hh, 16 years old. He has a fantastic kind, friendly temperament, is a true gentle giant.

6 year old stallion, well bred horse. Quite good for a bit sport or good for the drives. Let off with mares.

14hh Ride and Drive Gelding with Cart and Harness

14hh just turned 9 ride and drive black blagdon gelding, plenty of feather. He's pulled 2 and 4 wheels and worked with public on Skegness sea front. Also driven on a roads along side lorries, etc to Brigg horse fair. I put him in shafts about twice a year and he's fine has a little squeal thinks he's a girl but soon settles down in to his work. 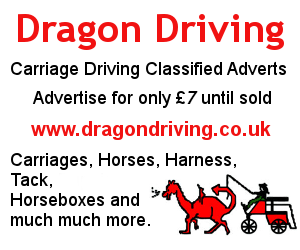